This is a more in depth update to an earlier post: halo-world-lives-on-in-legos

Ok this is simply amazing. 2007-2008 I was involved in one of the most memorable projects of my career –  Halo Wars. It was one for the books for number of reasons, huge piece at 26 minutes of animation, lots of fresh guys in the team, co-supervising (with Dave Wilson) a project totally in different scale than before, totally working my butt off etc. And others did too and to my amazement it still looks pretty stunning for its age.

One of the big part personally where I got to leave my own marks was the Spirit of Fire – the big starship. I worked with Hugo Martin who was the concept designer several iterations of sketches. Hugo’s concept had a great mood and very cool silhouette and was a total blast to turn into a detailed 3D-model. As I was modeling it on top of the supervising the days were not exactly short, but eventually I was happy with the result. As always I was bit nervous sending the samples of the final model to the client. Graeme from the client’s end was the person who had envisioned the whole ship. He was serious about the story and the ship – for example he had been already for quite a while writing an imaginary news letter for this ship. Super nice guy but also super vested. His response “Holy shit Heikki!” is one of the top memorable moments for me from my Blur years.

The client company Ensemble got assimilated to Microsoft and already before the launch of the game and it was obvious that there would be no sequels (that time…) and little support. Game itself was good but due to these circumstances it never got the marketing or attention it deserved. In my opinion anyway.

So finally to the point. Not everyone missed the work put by the Blur crew and Ensemble. A few years ago – well 2010 – a person called Mark A. Kelso contacted me that he is building a massive Lego ship of the Spirit of Fire. Already then you could see that it was amazing. Even though he had built it from quite limited reference – I was eager to help but felt bad sending him all the additional views as it showed some differences between his assumptions and what was in the actual ship. I encouraged him to just use the new reference as inspiration so that it wouldn’t set him back. In 2014 I got an email – the ship is finished. He fixed it all. I am floored.

Look at the photos in links below!

If you are going to scam – at least try

At my work we are looking to hire some CG talent. I just got approached by a person called Rafael Emidio (rafaelemidio@gmail.com). Quick glance at his provided portfolio link on dropbox looked promising. Nice range, ….wait, what??? That is work done by my buddy Brandon Riza!, heyyy… lets do an image search for the sliced car. Well the sliced car is a Maxwell render promo image done by a studio in Amsterdam. Turns out that most work can be traced to other artists.

Linked in has several Rafael’s so its unfortunate if someone who is not a scammer gets tainted by this. Please feel free to contact me if you feel that you are getting unfair attention. Its bit muddy as Rafael Emidio seems to be a 3d generalist, producer VFX house owner and what not. Do your checks (image search by image is quite priceless these days) before doing any kind of business with Rafael. As usual if someone has top quality work but hard to find online presence be skeptical. This is not as rare as one might assume.

Below is a screengrab from the dropbox page. There are two FX clips by blur – the Dante’s Inferno one and the bear in fire.  The car on top row is by studio in Amsterdam. the illustration on the right by http://www.luminestudio.com/

Animated emoticon like face is by Ross Philips. http://www.studioaka.co.uk/People/rossphillips 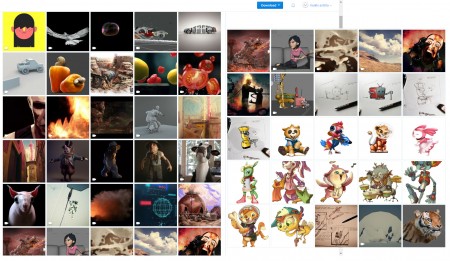 Prey 2 seems to be getting nominations on all fronts – well about as many as a video game trailer can. This time its Visual Effects Society’s VES awards. Big news! Congratulations to everyone involved, Dave Wilson, Greg Kegel, Hubert Daniel, David Nibbelin and all the other super stars.

Another nomination for Prey 2

Prey 2 was one of the runners – check the link below.

For an Annie award! It also was a nominee on Video Game Awards for best trailer. The crown went (rightfully so) to Assassin’s Creed Brotherhood.
I will upload some Prey stills while I am working on the annual maintenance of the web site.

Check the link under the #2 category.
http://www.awardsdaily.com/2011/12/annie-award-nominations/

In other news – still have not yet finished tie Fighter….

Blur wrapped several game cinematics for 2011 E3. I worked as a CG-supervisor on the pre-rendered cinematic trailer for Prey 2. We were able to pull off Blade Runner vibed alien city. Huge thanks for the people at Human Head, Goodness and of course at Blur.


This E3 season’s other Blur projects were:
Overstrike:
http://www.youtube.com/watch?v=kltLI5oL22k&feature=pyv

Not much to it, some basics for getting started.
Cover basic UI manouvers, commands, snaps, orthos, and basic drafting 2d tools.

Halo world lives on in Legos

I worked as CG-Supervisor on Halowars game cinematics 2007-2008. Halo’s rich and cool sci-fi unviverse alone made for a cool project. On top of that we had somewhat rare opportunity to work on such a broad project (over 26 minutes of cutscenes) and over long period of time, that the interaction with the developers ended up much more deep and fruitful than in short gigs where often the game is already practically done.

One part that Blur team got to influence was the UNSC Spirit of Fire (CFV-88) – space ship. How often does one get to be part of a design of a starship? Hugo Martin did initial concepts and after a few revisions he came up with a great solid design that I then realized in 3d. Its been some years now but still remember the process being fun and rewarding and something I am still very proud off.

Now, a few years later I was stunned to find out that there is a person creating substantial sized Lego ship of Spirit of Fire. Well not exactly – he is doing the imagined (as if the original was real) sister ship – Eye of Chaos.
Happens the person is called Mark Kelso and he is doing an amazing job, check for yourself:
http://mocpages.com/moc.php/247278

This is totally unrelated to anything. I loved the Tie Fighter simulator of the 90s and played it through a few times. In 2005 or so I bought a re-release cd from amazon. Well that didn’t work as it complained “This software needs windows95 – please update your operating system” – or something along those lines. I tried to get it running again a few years back with no luck.

About a month ago tried an Apache flight sim and got an itch to play tie fighter again. This time I found all I needed to get the game work in win xp64 – I think same tricks will do it for win7.

1) a joystick (it will not run without one)
2) a 32bit installer – the installer on the win95 release of the tie fighter games bonks on new systems. download it here:
http://www.markusegger.at/Software/Games/Default.aspx
Thank you Markus!
3) Not sure if necessary – compatibility patch from: http://lucasfiles.com/?s=&action=category&id=52

I think these tricks also work for the tie vs x-wing.

Oh – and it is not easy. 20 minutes to the mission and you tailgate the ship you blow up and boom it can all be over with no warnings.